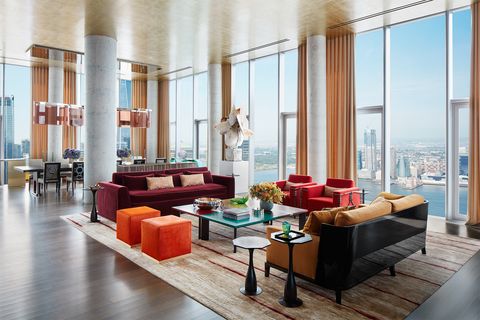 In the era of the skinny, super-tall skyscraper, Herzog & de Meuron’s 56 Leonard stands out—literally. Not just because it looms 821 feet above TriBeCa, a neighborhood in Lower Manhattan known for its 19th-century cast-iron low-rises, but more so for its bizarre shape. Made of uneven cantilevered blocks—no two floors are the same—the design becomes progressively incongruous toward the top. Taken as a whole, it looks unstable, almost shaky, which is why it’s now affectionately referred to as the Jenga tower, after the block-stacking game. “This building was iconic before it was even built,” says the interior designer Richard Mishaan, who can see the expressive concrete-and-glass structure from the conference room of his downtown studio. “It’s an extraordinary feat of engineering.” What Mishaan brought to a sprawling apartment there with four terraces, austere interior architecture, and panoramic views was a similar kind of balancing act.

Mishaan designed the space for a young family. He played to the parents’ avidity for contemporary art and glittering gemstones while providing stimulation for the children in the form of wild patterns and bright colors. “You can’t be too slick in a family apartment—kids have to be kids,” he says. That said, he sidestepped a “Fisher-Price child-friendly” palette with a scheme of rich hues that would appeal to just about any age group. สถาปนิก