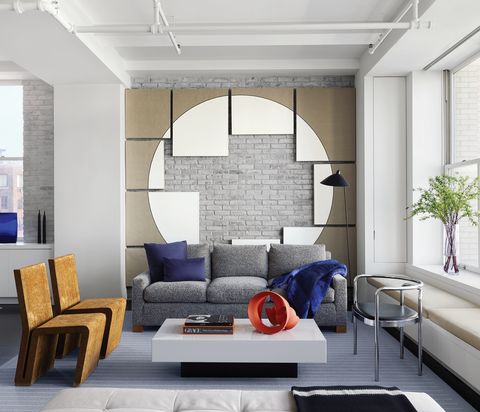 Maybe a dozen make it to your screens. Those are terrible odds. But not for Darren Star. In 1990,

a prime-time soap opera about teenagers who create a kind of family. He followed that with Melrose Place,

about another self-created family,

this time of young adults. Then he introduced Sex and the City, the first series to showcase unmarried

career women who lean on one another,

not on men. Along the way, he became an icon: a writer who invented a genre.

At first glance, Star’s longtime friend Lee F. Mindel has designed a Manhattan loft in a

Fifth Avenue that looks more like an urban retreat for a monk than the New York City base of a media impresario.

It reads as a rhapsody in white and gray:

brick walls, as Mindel puts it, “limed to create a veil of lightness,” freestanding millwork room dividers that look like